Story
Join Network
How it Works
About
Black Paper

Vibranium: The First Social Economic Network Built on the Blockchain

The inequity in the global financial system drives the economic disparities that exist in America and the lack of economic progress in Africa. African-American and African contribution to content creation, trend-making and influence has not translated into ownership and wealth-building. In the U.S. only 1.9% of media is owned by African-Americans. Despite the incredible wealth and resources of the United States attempts to improve the system and narrow the wealth gap have not been successful.

We are building a network that revolutionizes how we think about community, influence and wealth using web3 technology. We are bringing together a network of entrepreneurs, vendors, consumers and creatives that will work together to build wealth, generate capital and fund businesses and communities across the globe. Vibranium is committed to returning the Power to the People, Going off the Grid and making tools that allow for self-governance and empowerment.

The Vibranium Network will build a self-sovereign community of Africans and African-Americans who combined, have $3 Trillion in spending power.

By 2050 around 2.2 Billion people will be added to the global population, and more than half of that growth will occur in Africa (+1.3 Billion people). Much of Africa’s population boom will come from Nigeria, currently the world’s 7th most populous country. By 2050, Nigeria will become the world’s third largest country by population exceeding the United States. Africa is the youngest continent in the world (60% of population is below 25 years old). By 2050 ~45% of all people under the age of 25 will live on the African continent. Cryptocurrency provides a significant opportunity to control inflation, stabilize the value of goods and services across Africa and plug its creativity and entrepreneurship into the US.

The Vibranium Network is a decentralized closed loop economy powered by web3 technology.

VCentral – Central vault held in a non-profit entity that will issue tokens –total supply capped at 1BB. For every two tokens purchased, one token will be added to the VCapital pool.

VCommerce – A global marketplace of goods and services. The Amazon equivalent for the community…controlled by the community who decides which vendors are added

On the Vibranium Network you can earn Vibranium tokens as an influencer that shares content to your followers. These tokens will have been staked by brand owners and content creators who want to promote their product, information or service to the Vibranium community (Vfluence). An influencer can then use the tokens they earned to purchase goods and services from vendors who were approved by the community (VCommerce).  This same influencer can apply for a loan or grant to grow their business or to support a community project.  The community will vote on the application and decide which businesses and projects get funded (VCapital).

VBX is an ERC-20 token with a fixed supply that is managed and distributed by a series of smart contracts serving the following functions:

The Vibranium Network is powered by VBX. We intend to lay the foundation while looking towards a future where like-minded developers and entrepreneurs will be able to extend the platform with their own applications. To that end we’re building general-use functions that support  current and future development:

VCentral is a non-profit entity that will issue tokens. For every 2 tokens purchased, one token will be added to the VCapital pool.

Every community has a culture. Culture defines how a community acts, what it values and what it creates. In the age of infinite information, transformation creates awareness.

How does the culture claim the value it creates?   The Vibranium Network helps people to measure, pool, and sell their influence.

We built a smart-contract that measures the performance of content shared through direct messaging. 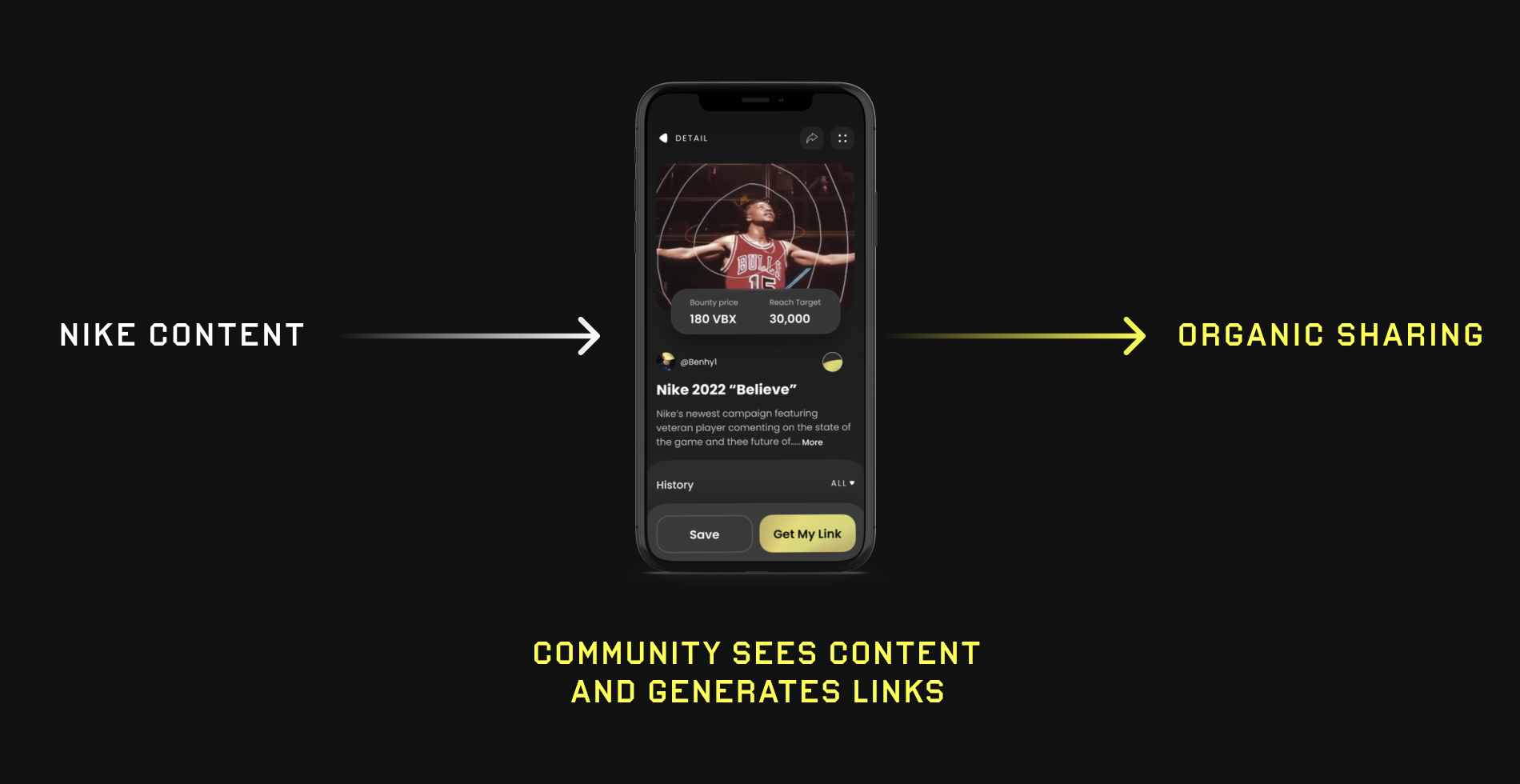 Yearly spend on user influencer content promotion (2025 projection) is $40 Billion. Small scale social interactions are fueled by compelling content. Person to person sharing of original content drives more action than traditional marketing campaigns. And we’re not even tracking most of it.

The online attention economy is inefficient

Only 30% of web traffic can be traced to major social networks and search engines. That means 70% percent of sharing and content discovery happens on what is called “Dark Social”. Dark Social = content shared through email, text and messaging apps. The estimated size of the current online ad market by 2025 is $982 billion. The potential value of accessing Dark Social is greater than $1 trillion. 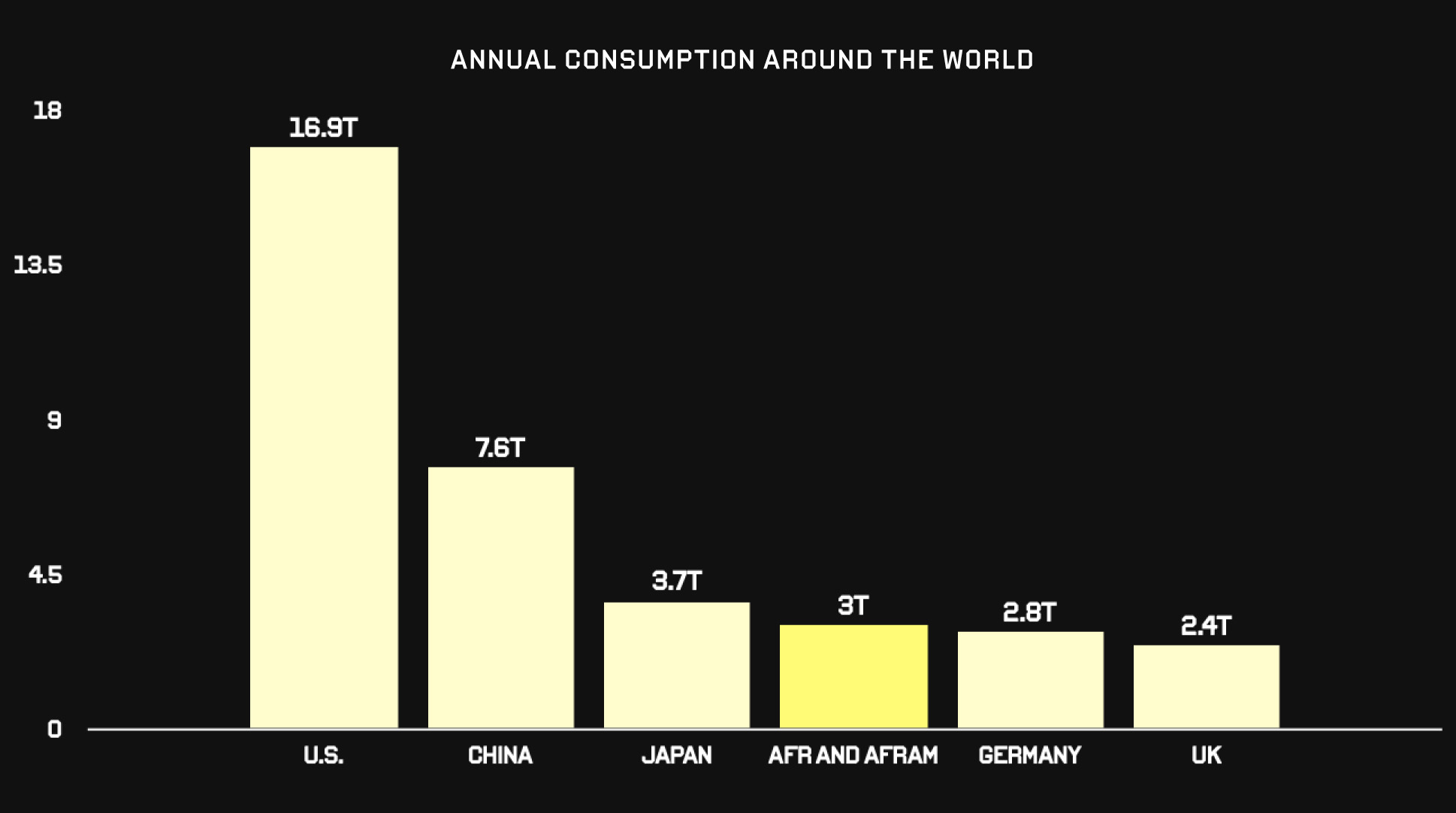 Commerce using Vibranium as currency will be comprised of the following:

3. Vibranium-Only Products
Products that will require a Vibranium token to gain access.

5. Information and Knowledge for the Vibranium community

VCommerce will allow African and African- American vendors to build distribution for product categories where Black dollars over index such as:

50% of Vibranium Token value will be added to the Capital reserve. The Vibranium community approves loans to African and African American owned businesses through a decentralized voting system. The community also approves grants for community-based non-profit organizations that build infrastructure or provide direct services in areas including health, education, housing, job training, and justice.

Vibranium Capital will issue over $1.8B in Loans and Grants over 10 Years 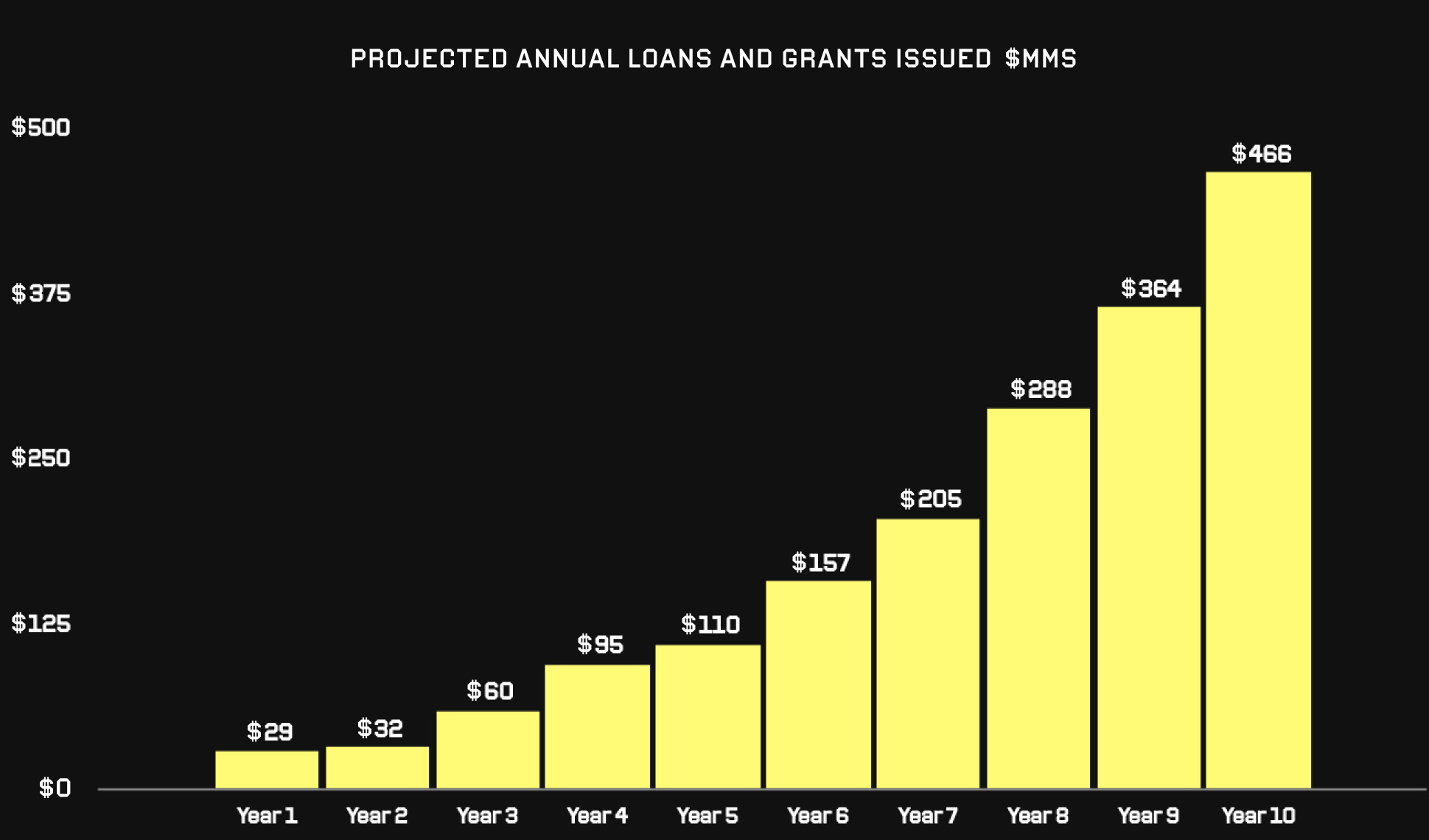 By 2011, the government owed $1.6 trillion, maxing out at $2.5 trillion in 2014. On March 23, 2020, the FOMC expanded QE purchases to an unlimited amount. By May 18, its balance sheet had grown to $7 trillion. Increased money supply drives asset values up and rewards those that already hold assets such as stocks, bonds and real estate.

U.S. Avg Net Worth Gap By Race Is Significant

African-American Business Ownership In The U.S.

African American business ownership remains on the rise and is continually increasing, growth has been incremental. In 2014, African Americans owned 2% of U.S.-based companies. In 2017, this figure inched to 3.5%. Despite this increase, Black-owned businesses continue to lag behind that of whites and other minorities in terms of market share. In 2017, white-owned businesses accounted for 81% of all U.S. companies, with Asian- and Hispanic-owned firms comprising 9.7% and 5.8% of the market share, respectively.

African-American Labor Force Participation Is Projected to Continue to Decline

Many Africans Lack Access to their Existing Financial System 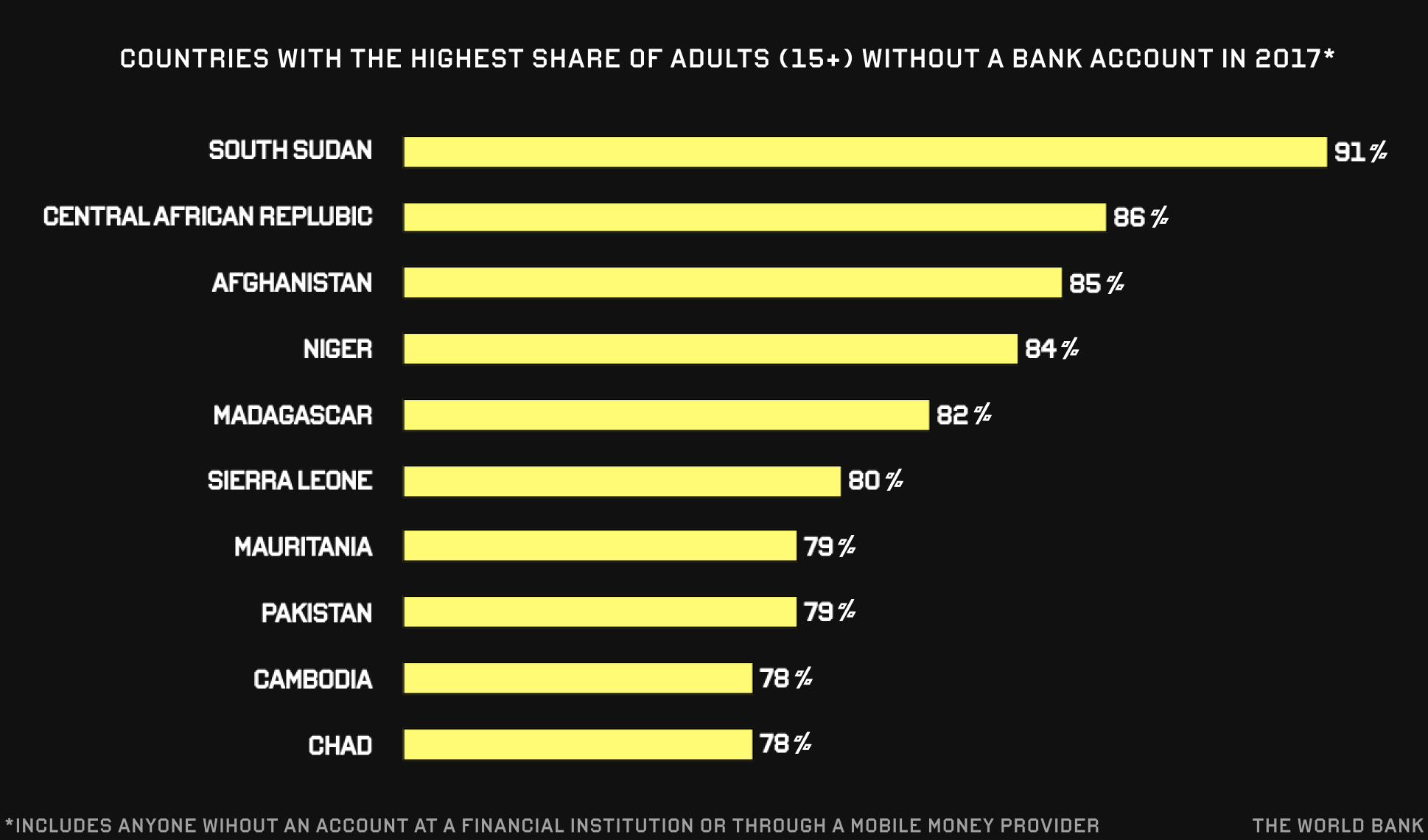 Crypto has been most widely adopted in Nigeria